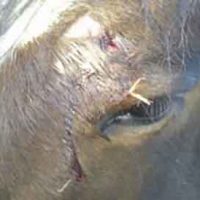 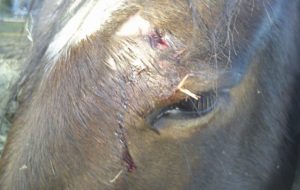 £30,000 compensation last month was awarded to Claire Macmanomy  last month(15 July). She was out hacking her friends horse Red in Gospel End, West Midlands when her horse was hit by a lorry. The incident happened in February 2014.

They were hit while Mrs Macmanomy was hacking Red to an indoor school which meant riding along a stretch of road for about a quarter of a mile.

The mare’s owner, Kay Hill-Sayce, was walking beside them when she saw a skip lorry approaching. When she saw the speed at which the lorry was travelling she took hold of the horses reins and signaled to the driver to slow down.

Ms Macmanomy “It is a journey we have done hundreds of times, but here is an issue with speeding traffic through the village.  I have campaigned and petitioned on these issues”.

When the lorry tried to pass them on a narrow section of road itclipped Red with its wing mirror and cut the horse’s head and hindquarters. The horse then reared up on it’s hind legs, throwing Ms Macmanomy into the side of the lorry. Then they both fell onto the road. “As I was falling, I remember thinking I was going to die,” she told H&H. “The air brakes went off and I heard the scrabble of hooves.”

A passenger in a passing car called an ambulance.

The horse called Red (an eight-year-old ex-trotter), suffered cuts to her dock, legs and face.

The lorry driver did stop further along the road but left before the police arrived. He was later found and after after admitting to failing to report an accident was fined £255, and had five points added to his licence

Ms Macmanomy was taken to Russells Hall Hospital in nearby Dudleyand was X-rayed.  She had broken thre lumber vertebrae and had to remain in the hospital for a month. After being discharged she had to wear a back brace till May 2014..

“I’m so passionate about road safety, and want to try and educate as many road users as possible about the dangers of approaching and overtaking horses on the road,” she said.

“I understand that some people will never respect other road users, but I’m not about to give up.”

Now, Ms Macmanomy told H&H she is now “terrified to hack out”.

A solicitor’s letter claiming that the lorry driver had driven contrary to The Highway Code and, as a result, hit the horse, was sent to the defendant’s insurance company in May 2014.

The insurer did not accept liability at first, so the solicitor requested the driver’s tachograph logs liability was accepted in October 2014.

“On examining the evidence, we pushed for an admission of liability to avoid the unnecessary and time-consuming litigation”, Hanna Campbell, of HorseSolictor said. She added that this enabled Ms Macmanomy to concentrate on her recovery.“Ultimately, this case was about Claire getting her life back, and our role was to ensure that she was provided with the means to achieve this,” she said.

Source: Rider receives £30,000 compensation after being hit by lorry

Scroll back to top