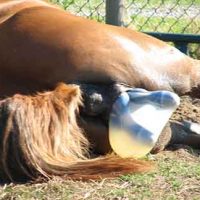 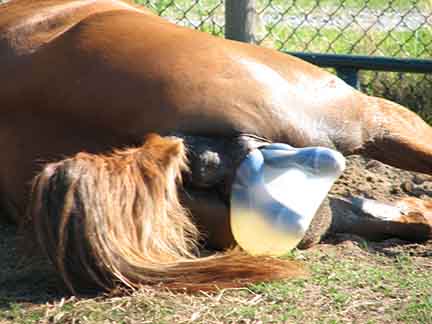 A European study of warmblood horses confirmed that maiden and aged mares were more likely to give birth to fillies.

“Breeding maiden and aged mares shouldn’t be performed with the goal to produce male offspring as a result of the sex ratio could be female-biased in these mares,” the Austrian and German researchers reported within the open-access journal, PLOS ONE.

In addition they discovered that the maternal lineage considerably influenced the length of pregnancy and the sex ratio amongst foals.

“To the best of our knowledge, this has neither been confirmed for the horse nor for different mammalian species to date,” Juliane Kuhn and her colleagues reported.

“The mare explains 13 to 18% of this variation whereas the sire contributes solely 2 to 3%,” the research group reported.

They noted that the length of the pregnancy was highly variable in mares. “Selection against maternal lineages with extended gestation length could possibly be an interesting approach to avoid the gradual postponement of the birth date of offspring in mares with every year.”

The researchers stated they set out in their research to analyze if pregnancy length and fetal sex ratio had been influenced by the maternal lineage. Both, they noted, confirmed high variability amongst individual mares.

They used data from 142 warmblood mares from the Brandenburg State Stud at Neustadt, Germany.

The stud has been constantly recording lineages of mares since 1946, with some capable of being traced back to the founding of the stud in 1788.

Records confirmed the average number of live foals produced per mare was 4.6. The live foal rate was 83.5% and the average length of pregnancy was 338.5 days, plus or minus 8.9 days. The pregnancies ran from 313 to 370 days, which represented a range of nearly two months.

They discovered that gestation length was affected not solely by maternal lineage, but additionally by the individual mare, the age of the mare, the 12 months of breeding, the month of breeding, and the sex of the foal.

“Of the 640 foals born alive at term, 48% had been male and 52% female. Mare age group and maternal lineage considerably influenced the sex ratio of the foals, too,” they mentioned.

Their findings confirmed previously reported analysis displaying that the month of breeding and the sex of the foal affected pregnancy length.

“Though the relatively brief breeding period used on the stud, with the vast majority of mares bred inside an interval of three months, lowered the occurrence of seasonal effects, gestation length was shorter when mares had been bred very early or late within the 12 months.”

The average length of pregnancies that produced colts was discovered to be longer than those for fillies.

The original research was published under a creative commons license.